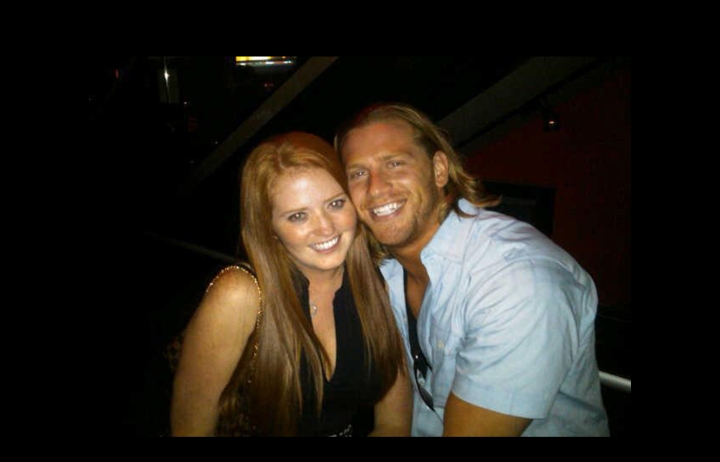 For my 23rd birthday, I decided to plan a “casual” trip to Atlantic City. I was a few months single and having so much fun with my friends that summer.  I often make my birthday an event since it’s in the summer.  Some of my friends hate this and tend to avoid it, but others look forward to it.  I rallied up a bunch of people, told them where we were staying and to book their rooms.  I think there were 25 of us at Harrah’s Pool Party that night, blacked out from the pregame.

Brian tells this story best since I was pretty incoherent. I saw this long-haired man from a distance, and casually pointed at him and told him to come over.  He was confused and thought I was a friend’s sister at first.  Once he realized I wasn’t, I reeled him in. Mind you, I was wearing this neon one-sleeved dress, but my hair was on point – that’s definitely what caught his attention.  Brian was in Atlantic City for no reason other than to party with his friends.  When I tell people we met in Atlantic City the first response is ALWAYS “Were you at a Wrestling event”? No. No, I was not at a wrestling event in Atlantic City. I didn’t know this long-haired man that I found was a wrestler and knew nothing about wrestling. I watched it as a child when my brother would make us but that was about it.

Our friends basically hung out the rest of the night. There were photos of us kissing at one point but I made my friend delete those. Little did I know Brian would one day be my husband.  He told his friends that night that I was the one… a drunk girl from Long Island was “the one”. Go figure.  My night ended rapidly when I decided to put my shoes on after standing in the pool.  I fell on the stairs and I definitely sprained my ankle and needed to get out of there.  He somehow managed to get my number from me.

My friends made fun of me the next day that I was kissing and talking to “Fabio” all night.  He texted me a few times that he thought I was cute and we should hang out.  I ignored him, I wasn’t really looking to talk to anyone, I was having a fun summer with my friends.

A month later, he texted me one more time. “Look, I thought you were really cute and I want to hang out again”, after all, he knew I was the one.  I answered, “Sorry just seeing your texts” as if they had disappeared into thin air.  We texted a few more times, I then became the chaser and was worried he started to lose interest in me.  Turned out he was often traveling for work.

He eventually said to me “we should find each other on social media”. What a time to be alive.  I searched “Brian Myers” on Facebook and the same picture came up on multiple accounts. Now I’m thinking I am being tricked? I told him I couldn’t find him and asked why there were so many accounts? How do I know which one is you? Who are you? He asked for my twitter handle…that he would find me on there. A subtle way of finally telling me he was a WWE wrestler.  What the heck is going on? Is this you? You’re a wrestler? My brother is going to lose it if I tell him I’m talking to a wrestler.

We decided to meet up with our friends in the city. I was skeptical even though I had already met him, I didn’t know what to expect.  I made 2 of my girlfriends come to meet him and his friend with me.  We ended up having so much fun.

He was traveling quite often but asked me on an official date in September to “Old Town Bar”.  I thought this was random for a first date, but he had asked his Dad where he should take me in the city and the bar definitely had some character. Also, how cute is it that he asked his Dad? Anyways, playing hard to get was definitely the key to kicking off our relationship.  We often switched who was chasing who, but ultimately we both wanted the same thing, each other.

Happy Anniversary @myers_wrestling
Our friends @beaus_and_babes launches on 10/1! Head to their page for exclusive news on receiving a discount for their launch!
Off to Pre-K 📚
Bathed and Ready for bed. Not without a goodnight kiss first 🥺❤️
Mini and Me☀️♊️
My fam jam 🌻
Their favorite part of the day was the parking lot party ⚾️
Today felt like the longest day with these crazy babes. So many times where I thought I was going to lose my mind. It’s these little moments that I can’t wait for the next day all over again ❤️
My heart is so full ❤️