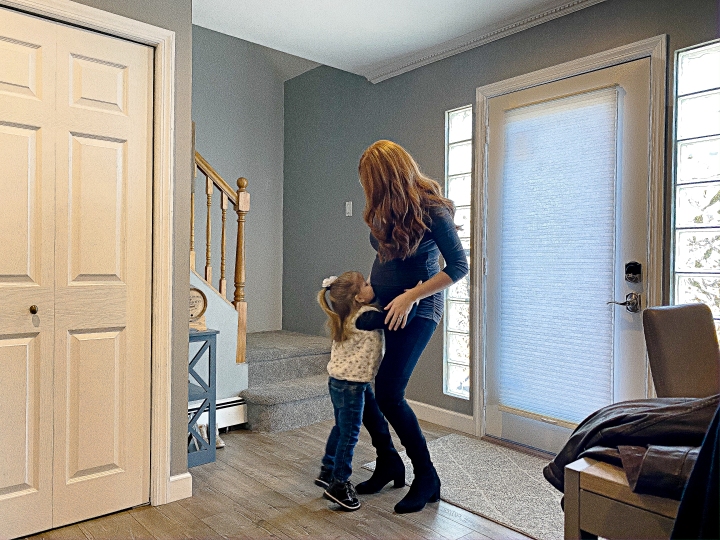 This pregnancy seems to be flying by. In the beginning, I felt like I was already pregnant forever, but I think that was because I was feeling sick for awhile. I think because the morning sickness ended earlier for me the first time around, I just expected to be early in my pregnancy when it ended this time. Since that wasn’t the case, it seemed like the weeks were flying by.

Looking back at my first pregnancy, I was showing for sure at this point but I don’t think I “popped” until 22 weeks. Every time I thought I had popped, the next week would just prove that I had not yet. This time, I had “popped” at like 16 weeks. I know you are suppose to show earlier the second time around because of muscle memory, but I just didn’t think it would be that much earlier.

I think the biggest difference between my first pregnancy and this one if how tired I am. My daughter really wears me out, and while I don’t really nap anymore unless I have a headache, I am still so exhausted by 8pm. My symptoms in both pregnancies were pretty similar, just more intense this time around. I wasn’t throwing up the first time but this time I did a couple of times. Luckily, I did not get a kidney stone (yet) this time around! Though I was still having awful reflux, I am not taking tums which I am convinced caused my kidney stone the first time. Around 16 weeks I asked my Doctor if I could take Prilosec again and that has been helping big time.

I had asked on my instagram poll if you guys had questions for me and I’d say 85% of you asked what the gender is! We are not finding out the gender!!! We didn’t find out what we were having with McKenzie so we decided to do it again. Honestly, it’s the best feeling in the world being surprised in that moment. I think it motivated me so much during labor even though I’m sure every woman wether you know it not is motivated to get the baby out after 40 weeks of pregnancy. I can’t compare it to finding out sooner since that’s a surprise also, you just know for the rest of your pregnancy.

How am I feeling? I think emotionally, this pregnancy has been taking a bit of a toll on me. I’ve been having a bit of anxiety around having a second kid sometimes, especially when McKenzie is acting up I’ll think “how am I going to do this with 2?” thinking to days or weeks where I will be by myself. I’m starting to prepare myself now. Really working on distractions or options for McKenzie to try and handle her tantrums. I know it will all be fine, plenty of people do it and thrive on chaos. I’ve also been overthinking things more frequently, and have even been getting weird anxiety about seeing friends and family. I’m always able to pull myself through, but I need to remind myself that it’s probably just my hormones creating these feelings.

Don’t get me wrong, I don’t always have those types of feelings. Of course I can’t wait for this baby to be here, and I’m getting to the point where I’m wanting to start nesting but I know I still have 5 months to go so I’ve just been jotting down lists and ideas. McKenzie knows a baby is coming too which makes me so happy and more excited. I feel so lucky to be a part of a healthy and happy family and I can’t wait to add one more to the mix.

My mood and my body have been changing every week, and I know that will continue to happen. I’m starting to appreciate the growing bump more and I will learn how to try to control the emotions that come along with it!

Happy National Daughters Day to my best gals 💕
We love you @myers_wrestling ❤️
Off to school she goes!!!
Off to Kindergarten 🌟
We love @yumblekids for SO many reasons! It has been so convenient for me for the end of summer when we’re wanting to spend more time doing fun things than having to worry about cooking a meal! It’s been a huge time saver for Mama and the girls LOVE to eat their meals!
How is it possible that you start Kindergarten NEXT WEEK?? I can’t stop looking at pictures of McKenzie growing up 🥹 I’m so proud of her ❤️🌟
Ain’t nothing like the real thing ❤️
The girls have been so excited about their @yumblekids meals! Madison was resistant at first but she’s coming around for week 2 of the #yumblechallenge 👏🏼 so proud of you Madison!!
⚾️ 🧡 💙