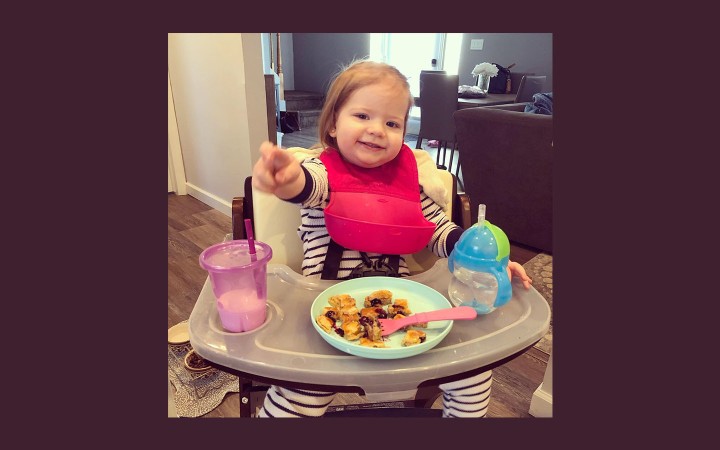 Kenzie is a great eater, but sometimes I take the easy way out as she becomes a bit more picky. Like most kids, she lives for pasta, bread, cheese and fruit. If I know her teeny growing body is in need of a veggie or 2, I’ll mix them into her favorites. Or, if there is something I want to start introducing to McKenzie, I will mix it in with something I know she will eat.

Kenzie loves a quesadilla, or “dilla” as she calls it. Pro tip- Chipotle has the best kid meal and it’s $5! We get a chicken quesadilla, with brown rice and corn. It comes with a side of fruit and a drink as well. All for 5 dollars!! Kenzie absolutely loves it.

I always try to keep tortillas in my fridge to make tacos or quesadillas. These really come in handy for last minute dinner ideas that you can easily throw together. You might be thinking “this isn’t rocket science, why are you telling us to put these ingredients together”, then bravo if you are thinking that. You are basically a sneaky chef already!

Some of my favorite wraps are the siete almond flour tortillas that I order off Prime Now as well as the whole wheat tortillas from Trader Joe’s. I will basically put anything in a dilla, but here are some of Kenzie’s favorites.
– Cheese, spinach, shredded chicken
– Bean and cheese (side of smashed avocado to dip)
– Cheese, corn and chicken
See, very simple. And in my eyes, a little more nutritious then a plain old grilled cheese!

I rarely give McKenzie Mac & cheese without atleast putting peas in it. If I have ground beef I will usually sauté some and add that in as well! When I first started to add veggies or meat to her mac, she would pick them out and only eat the pasta. Then she would pick out some and eat everything else. After awhile, she would just dig right in and eat everything. I think exposure is key, just stick with it and try not to get discouraged after the first attempt! My favorite pasta to give her is banza chickpea pasta. You need a sauce when you serve this as it doesn’t have the best taste without it in my opinion. I like to serve it with pesto or a homemade tomato sauce with meatballs.

Another item that is always in my freezer, cauliflower pizza. Who doesn’t love pizza? Sometimes I will even add my own toppings to this, but if I’m feeling lazy we just eat it plain and it’s still yummy!

These aren’t items that I serve all the time, I know they all have cheese and usually frozen items might have a bit more sodium which I keep an eye on. These are just some items that are atleast offering McKenzie different types of flavors and veggies that she likely would not just eat on it’s own at first.

The last thing that I have started to do is put spinach in smoothies. We get really excited about making smoothies. A friend told me she puts spinach in her kids smoothies almost every day. Sounded pretty gross to me but I gave it a shot. You really can’t even taste it! Here are some simple smoothies I have been making for both McKenzie and myself – nothing is better then getting your kid to eat what you eat so you don’t have to make 2 different meals.
-Ice, Almond Milk, Banana, Strawberries, handful of spinach
-Ice, Almond Milk, Banana, Handful of spinach, peanut butter, cacao.

McKenzie was allergic to eggs the first year of her life so I haven’t messed around too much with egg muffins, but I know you can definitely get some veggies incorporated there! I know guys, these ideas really aren’t that impressive. The idea here is to replace with something a bit healthier where you can, or to try and offer a new veggie slowly into your routine! I would love to hear whatever tricks you guys do!

🌟My greatest gifts in the entire world.🌟
10 Months 🌟
Happy Birthday to my the best Husband, Dad, Son, Wrestler, Podcast Host, Friend.. the list goes on and on. I am so grateful I found you @myers_wrestling 😜 I hope you have the very best Birthday ❤️
Happiest Together.
Had the best Easter with our little chicks🐥🐥
Had the best getaway with my guy❤️
9 months already?! This little fearless babe is keeping us on our toes. We love you so much Maddie girl ❤️
My🌈☘️💞
Grateful ☀️