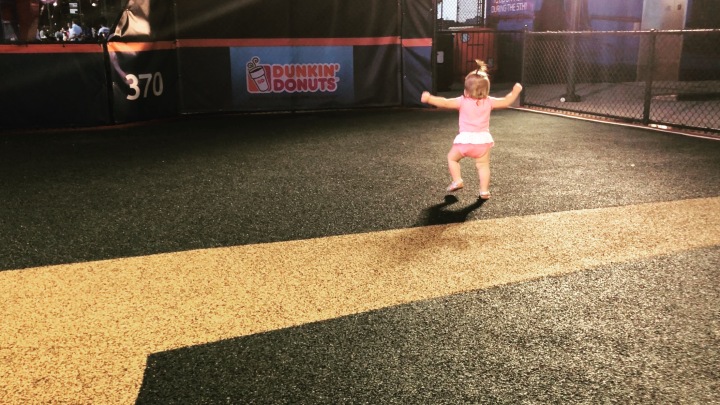 Brian has always been a huge Mets fan. Myself, I’ve played sports my whole life so I’m always down for a sporting event – as long as good food and drinks are involved! He has basically converted me by marriage, and buying me an endless amount of Mets shirts, shorts, pants, and shoes. Yes ladies… I own Mets shoes for some reason. When Bri and I lived in Bayside we would go to Mets games all the time. Now that we live in Long Island and have a 2 year old, we still go to games when we can but the experience is a tad different.

The first time we took McKenzie this year was more of a learning experience. Cold weather, long lines, late game – all the things that can contribute to a restless toddler. She did get to meet Mr. Met and Brian got her a Mets jersey, so it was still a pretty good night for us! The night after the game, we were sitting on the couch watching another game (Baseball is life over here) and Kenzie was cheering her little heart out. It was like she all of a sudden understood that she was there yesterday and they are on TV today. That, or the fact that we were letting her stand on the couch and yell go Mets at the TV. We like to think it was the first case!

Some things to note it if you are bringing a kid to the game
1. There aren’t many places within the stadium to sit down and eat.
2. You can bring food into the park
3. Section 121 offers a less expensive kids meal
4. It’s worth it to buy seats with club access incase it’s hot, raining, or you just want a safer place for your kid to roam
5. Only take cute photos when no one is up at bat.
6. There is a kids corner with games that Kenzie spent a majority of her time just watching them the last time we went. Watch out for flying wiffle balls!

The next time we took McKenzie this season, she was very into it! It was still a 7 PM game so it was a little late but 1PM games are during her nap right now so I’m not sure how we would manage that at the moment. We got to Citi around 5:30 so we could tailgate which she loved. We brought some toys with us and made sandwiches for dinner. There was a decent crowd that night so lines were long again, in the future I’ll have one of us walk ahead to do a majority of the line waiting. Brian also signed us up for Clear since that area never has lines so I’ll let you guys know if that is worth it!

We ate ice cream in our seats which was super messy but totally worth it. It’s pretty scary at times sitting in the seats, not something I ever thought of before having a kid. There were a few times that I look to see what McKenzie is doing or help her with something and all of a sudden a foul ball is coming our way. I’m totally all for extending the nets because it’s really scary to have to pay attention the entire time and attempt to watch your child. Even if a ball does come directly our way, I know for a fact I would be used as a shield to protect Brian and McKenzie, so let’s just get those nets up.

We got tickets in the Hyundai club a few times last year, makes for a really nice gift for someone if you have a foodie baseball fan partner or parent. Some of our favorite stands to get food from if we don’t bring food in

Basically we just always have a good time at games so we love to go. If it’s your first time bringing your kid they will give you a certificate which is cute, just let someone know when you walk in! McKenzie lasted until the 5th inning last time we went but at that point just wanted to run around so we called it a night.

Happy New Year 🥂
Merry Christmas! Love, these 2 🥰
What better way to embrace everyone feeling better than breakfast with Santa?! They were so excited to dress up and meet the big guy.. Maddie talks a big game though 🎅🏽
November was hectic
Just another day dressed at the “Hot Mess”
Wouldn’t trade this for anything 🙏🏼 Happy 7 @myers_wrestling
We love @chelseaagreen 💗
Find the one you can’t live without ✔️
Happy National Daughters Day to my best gals 💕