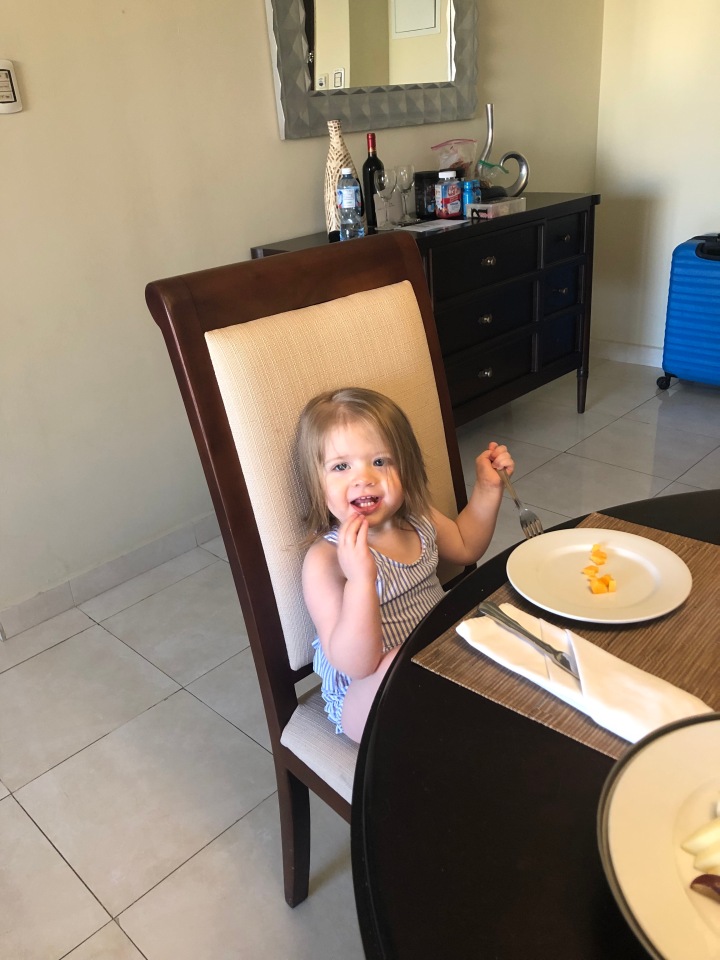 When I first started my blog, my friends would ask “what are you going to write about?”. I told them I’d write about my experiences raising McKenzie, what it’s like being married to Brian, health and fitness, and anything outside of being a working Mom and wife. I mentioned I was going on vacation to Aruba in February, so I’d give tips on traveling with a toddler. Tips. I set the bar pretty high for myself from the start thinking this would be a successful journey. The truth is, we had our ups and downs while traveling. So, rather then my “tips” on traveling, I will share my experience.

Brian was in Louisana (I think) last weekend so he planned to meet McKenzie and me in Aruba. That was fine, McKenzie has been on an airplane before so how bad could it be? She went on an airplane when she was 8 or 9 months and still nursing and napping 2-3 times a day so she was pretty different from where she is now; 20 months and takes one solid 3 hour nap most days. Brian booked a direct flight for Kenzie and I for 8:30 am Tuesday morning. I would 100% recommended flying direct if possible when you’re by yourself with a toddler. I woke McKenzie up around 6am and off we went. She was extra cute that morning, very snuggly and just observing what was going on at the airport. I have TSA pre-check which I also recommend you get because we waited maybe 20 minutes to get through security. I had to take Kenzie out of her stroller to go through security… then she didn’t want to go back in. That was fine, I walked around with my 26 pound daughter all the way to our gate.  Of course, she tried to run around when we got to the gate but I wasn’t ready to be the girl who leaves her bag unattended so I pulled out my phone and we looked at pictures. A few minutes before boarding I took Kenzie to the bathroom and changed her diaper, popped her back in the stroller while I peed and she looked on with confusion.

We boarded with “people who need extra time to board”, that’s who I decided we were apart of. We got to our window seat and I wiped everything down. There was a young boy in the aisle who made his mom switch with him.. poor 13 year old didn’t want his flight interrupted by an annoying toddler. Kenzie was so good for this flight. I made protein banana pancakes the night before so I wouldn’t have to worry about a messy bagel all over the place. I also packed a ton of snacks like goldfish, teddy grahams, an apple, and some teething crackers. I made sure she drank her water during takeoff which she did with ease. Then we colored with no mess markers, played on the iPad(we downloaded a few Sesame Street episodes so that I had them ready to go) which she used her headphones for. We at pancakes and just chilled most of the flight. I think I even dozed off once or twice.  I went to the bathroom to change her about 3 hours in. That’s fun.. having your kid stand on the changing table while you pray she holds onto you. Then when I had to pee she just picked things up off the bathroom floor and handed them to me. We then washed hands as I tried not to vomit 😀

I thought for sure Kenzie was going to fall asleep a few times but she didn’t. She was definitely exhausted by the end of the flight, kept standing up and sitting down and was starting to throw some things but nothing crazy. We landed and told her we had to put shoes back on. You would have thought I said no more Elmo the rest of your life. She lost it. Kicking, screaming, crying. I tried to stay calm as people walked by me smirking. “Aww and she was so good the whole flight”. Thanks, nothing to see here! I was mostly scared she was going to hit her head on something while trying to escape me. I finally got her shoes on and we got off the plane. She was still screaming and refusing to get in her stroller. So I just said forget it and I carried her and put my bags in the stroller. I eventually let her walk a little and she listened and held my hand. Then I had to fill out paperwork because no one gave me forms on the flight. So I had to pick her up and she lost it once again. I mean really lost it. Anytime I take her freedom away the world ends. But this time, I’m in a country by myself trying to keep her from running away from me. Some nice grandma was waiting for her family and saw me struggling. She said to McKenzie “aww why are you crying sweetie” and I started to cry. I was mortified. Kenzie and I were just over this day of traveling. Another woman came and filled out half my form then I got my shit together and proceeded. It was awful, but props to the helpers who saw a Mom struggling. I finally got through and found my bag waiting for me by itself on the belt. Thank God my friend Shannon texted me that they now landed so I only had 20-30 more minutes to wait. I don’t know what the heck I found on YouTube, learning colors or something, but Kenzie was mesmerized and we pulled through. Brian landed 2 hours after me and got into our hotel room 5 minutes after I walked in. I hope that paints a picture of how dragged out it is traveling with a toddler solo. It was a lot, but holy moly did that sunshine make up for that dreadful 2 hours I had after we landed. We washed up and threw on our bathing suits. Kenzie napped maybe 10 minutes in the car ride to the hotel but that was enough to turn her day around. I don’t think I would have changed any times about our flight there, she could/should have napped but she didn’t. Maybe next time I’ll just leave her shoes on?

I will do another post about our friendcation with 2 kiddos, but let me continue about our travel home. This time I had Brian with me, thank heaven. Our flight wasn’t until 3:30 so we woke up and had breakfast and played by the pool. We figured we would wear her out in the sun and she would have to nap when we got on the plane. I will now set zero expectations for having my toddler nap on the airplane. In fact, I will now prepare for my kid to stay awake the whole flight. By the time we got to the airport around 1:30, McKenzie was exhausted. Brian stopped to get her some snacks and we gave her some benedryl. McKenzie was a snack queen on this flight. She had a 5-10 minute attention span for anything on the way home, which was 4 hours and 15 minutes. It was rough. We were upgraded to comfort so we had a ton of space in front of us. McKenzie would sit on my lap, we would play a game or color and then she wanted to squirm down. We would get her back on our laps and give her a snack. We went through this cycle the entire flight with a few meltdowns in between.

It was a rough few hours, I really don’t know what I would have done if I was solo. Brian looked at me like I was crazy when I said let’s stand her up and change her diaper. I knew how gross it was to bring her in the bathroom and how much easier that would be at my seat, especially if she didn’t poop.

By the time we got home, it was 8pm. We gave her a bath and some chicken nuggets since she had not eaten any real meal. We were so happy to be home and in our own bed with the weekend to look forward to. Around 6am, I heard McKenzie coughing. I thought to myself, great. I let this child crawl around the airplane and now she has a cough. It was 9:45 and I suggested we wake her. We opened the door and she had puked everywhere. It was really everywhere. My poor baby. I felt terrible. Did I give her too many snacks? Should I have scrubbed everything down more on that airplane? She was vomiting and had diarrhea all day long. We think she probably caught a virus either at the hotel or in that airplane. The reality is, we did the best we could. This stuff happens, right? We went away in February and it was worth the hassle but maybe a virus is the price you pay. I wish it was me though. I felt so bad for McKenzie all day and really hope she is better today.

So much for my post on tips for traveling with a toddler. I leave you with this. Pack snacks and games and even an iPad. Set your napping expectations low and use wipes and hand sanitizer. Maybe get your kid their own seat and don’t take their shoes off. Most importantly, don’t let the fear of something bad happening or someone getting sick stop you from traveling. This was one of my favorite vacations and I can’t wait for the next one.

3 thoughts on “Traveling with a toddler.”

Happy New Year 🥂
Merry Christmas! Love, these 2 🥰
What better way to embrace everyone feeling better than breakfast with Santa?! They were so excited to dress up and meet the big guy.. Maddie talks a big game though 🎅🏽
November was hectic
Just another day dressed at the “Hot Mess”
Wouldn’t trade this for anything 🙏🏼 Happy 7 @myers_wrestling
We love @chelseaagreen 💗
Find the one you can’t live without ✔️
Happy National Daughters Day to my best gals 💕